Recently, I came across a paper on enzyme activity optimization using Bayesian optimization. I was fascinated at how efficient it is in saving time and lab resources in finding the optimal solution.

Why use it and when to use it?

I’m going to borrow the example from Apoorv Agnihotri et.al on gold mining - imagine there is a piece of land with gold, you want to find the location with the highest gold content with minimum drilling.

This task satisfied the followings:

Bayesian optimization first treats the black box function f(x) (e.g gold content distribution) as a random function, we need a surrogate model (discussed in the part II below) that is flexible enough to model this random function as a probability distribution, such that we are not fitting the data to one known function but a collection of functions.

The prior distribution of f(x) can be derived from experience or with limited data points (e.g gold is usually distributed in the center of the land).

Upper confidence bound (UBC): choose the next point as the one with the highest expected value and uncertainty.

In Bayesian optimization, we need a probabilistic model (also called a surrogate model) to approximate the black-box function.

The Gaussian process is frequently used as the surrogate model, given it is a random process where each point x (e.g location of the land) is assigned a random variable f(x) (e.g the gold content of the location x), and its joint distribution of a finite number of these variables p(f(x1), f(x2)…f(xn)) is also Gaussian. Gaussian distribution has many properties. The following slides are taken from Dr. Richard E. Turner. 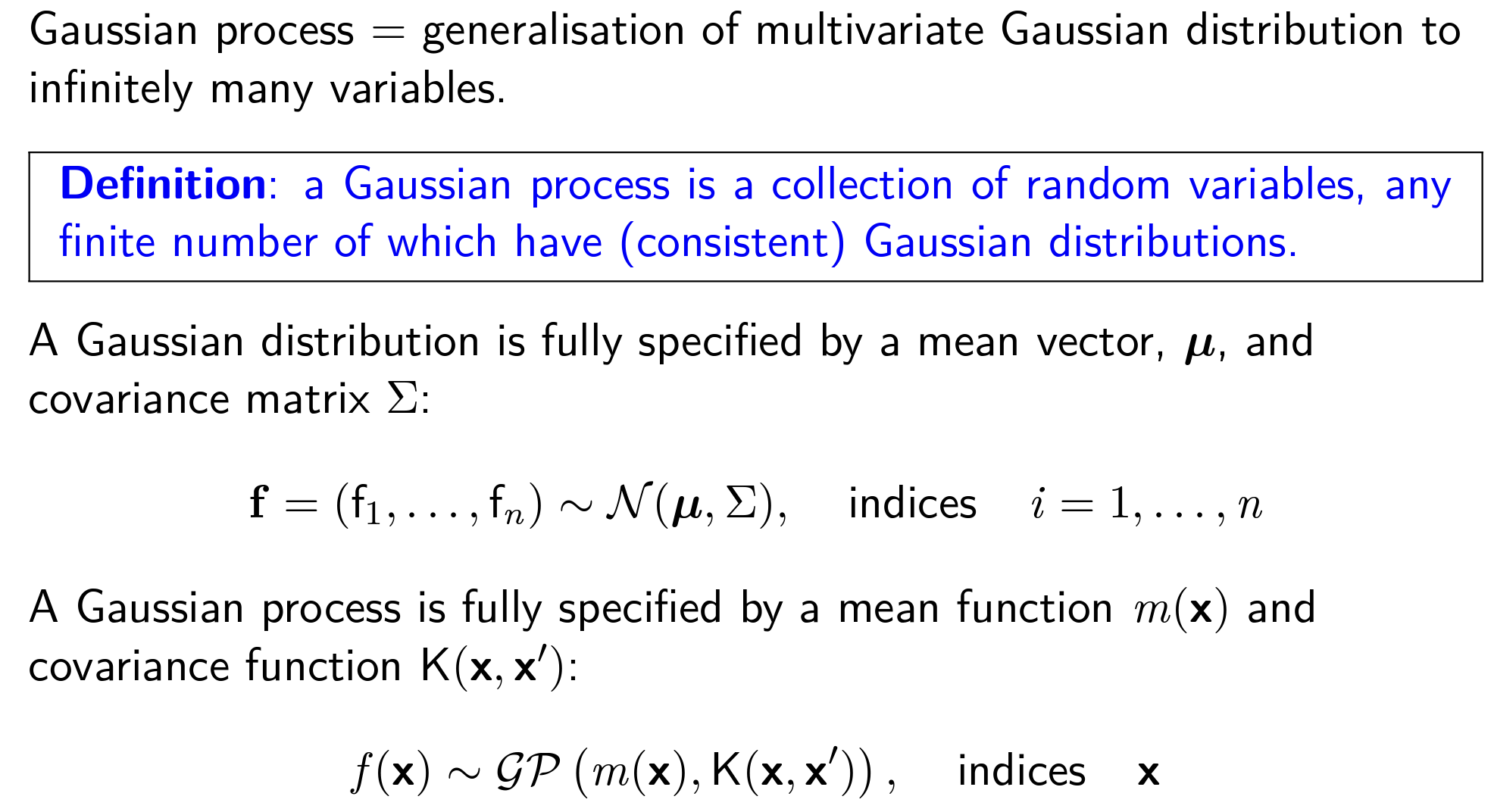 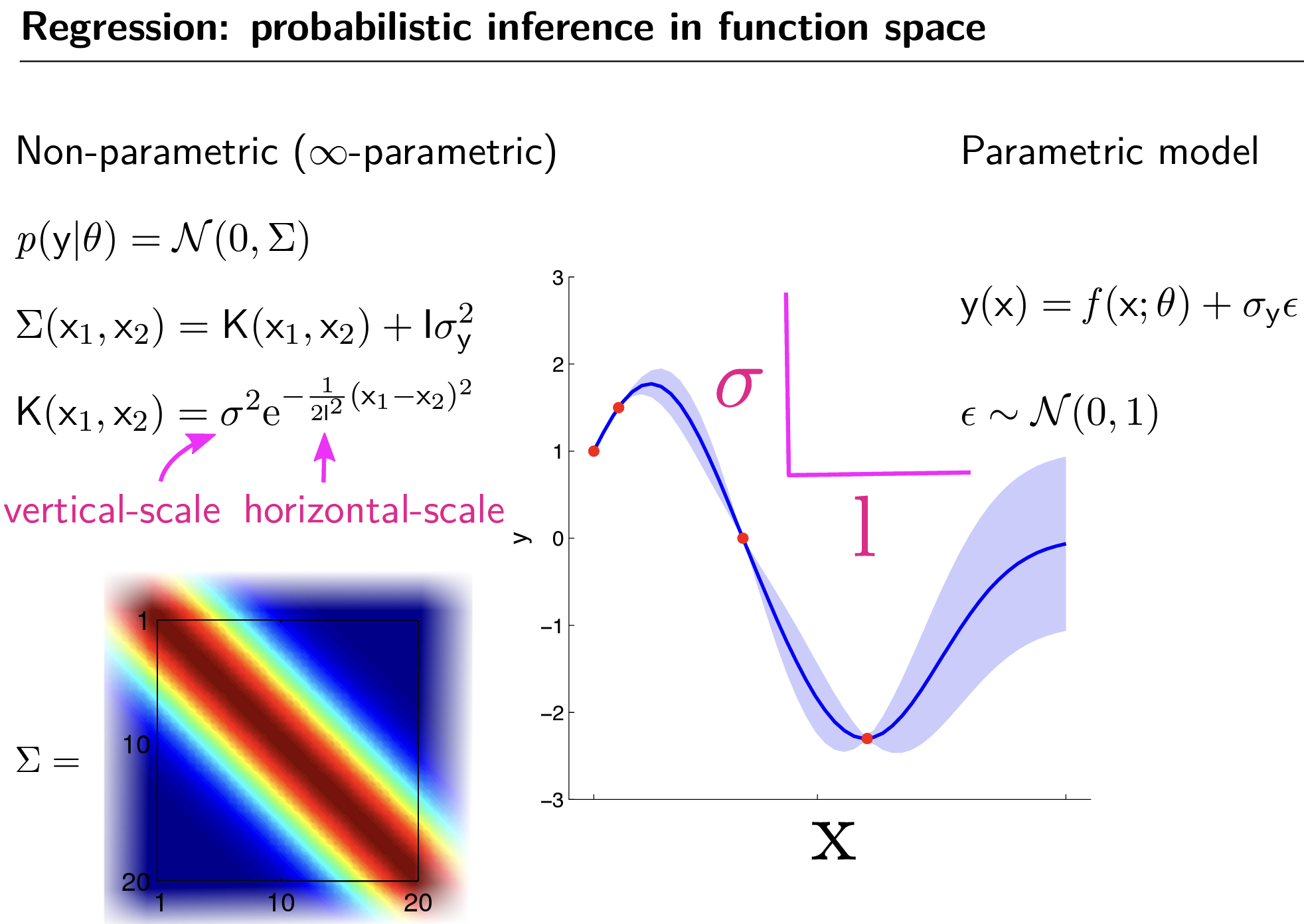 There are several parameters of the underlying Gaussian distribution that determines the shape of distribution of the black-box functions that Gaussian process is trying to infer. the l in the kernel function controls the level of wiggliness of the curve, the bigger the l, the more correlated nearby points are, and the less wiggly the curve will be when sampling from this kernel function. 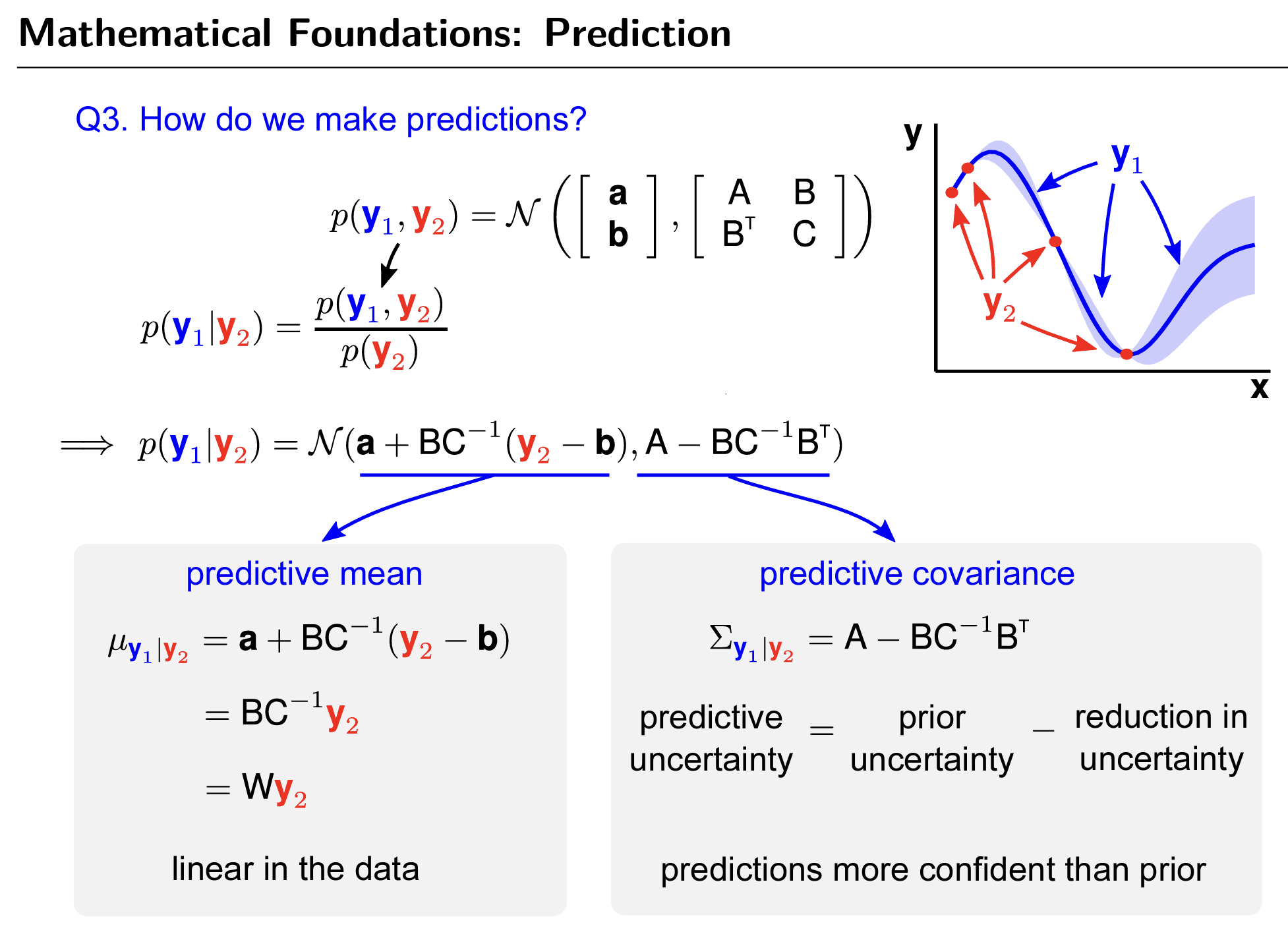 In order to predict the potential values in the unknown location with well-calibrated uncertainty, we plug in the values of the observed data as the prior over the underlying functions according to experience, it returns the posterior distribution over the underlying functions as well as the likelihood of the distribution parameters to be selected by acquisition function.

How to set the value of parameters in the Gaussian process

It turns out that we can either do parameter tunning in the first round of model fitting (if we have enough data) and hold them constant in the following rounds of optimization or do retrospective studies once we collect enough data after n rounds(in this case the analysis is done post hoc). See Effect of kernel parameters and noise parameter section from Gaussian Process by Martin Krasser.

GPytorch, an efficient implmentation of Gaussian process in Pytorch also provides utilities to use gradient decent to optimize negative marginal log likelihood for the optimal parameters.

Q: How many rounds does it take to find the optima solution (e.g the highest gold content location) and how do we know we have it ??

The number of rounds of needed to do Bayesian optimization depend on the level of noise in the data, the accuracy of the prior assumptions, the area of the finite space to sample from. The paper on enzyme activity optimization had ~4,500 unique sequences to search from, and it took 9 rounds (each round <10 sequences were evaluated) of optimization to find the best performing enzyme. Instead of having to evalucate ~4,500 sequences in the lab one by one, the authors only needed to evaluate 90 sequences, that reduced the lab work to 2%!

Like other machine learning methods, the optima is reached either when we have learned the black-box functoin well enough (we drilled all possible locations on a given land) or we have found a satisfying answer within the budget.

When to not use Gaussian process

Given the formula of solving the conditional probability of the predicted points involves inverting the covariance matrix C of observed data (let’s say we have n observed samples so the covariance matrix C is a n x n matrix, the cost of doing the matrix inversion is x3). One way to work around this limitation is to summarize the n sample with m pseudo data points, where the m pseudo data points are selected to capture the real distribution of n data points (e.g fit a local Gaussian regionally with boundaries agreeing to each other).

Gaussian Process, not quite for dummies by Yuge Shi

Gaussian Process by Stanford U