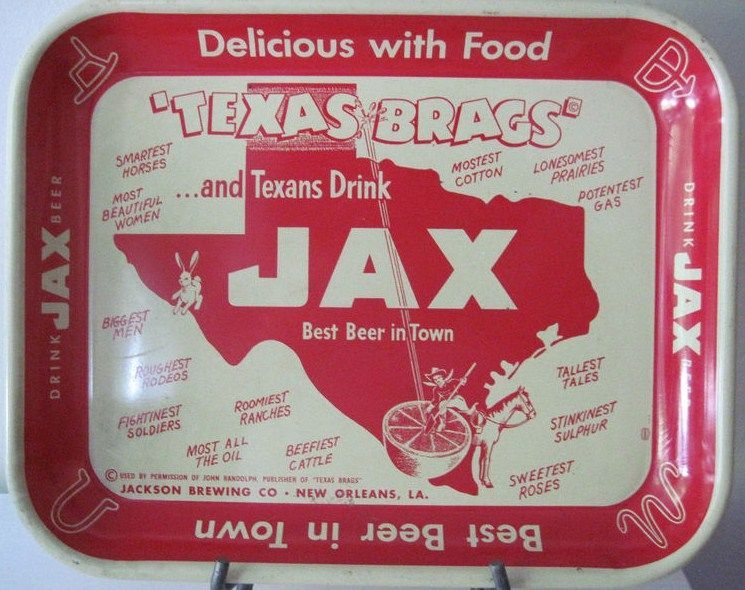 In the recent weeks I’ve been learning about JAX, a Python library for machine learning developed by Google Research team and extensively used by Deepmind.

What is JAX and why is it different?

Resources to learn about JAX

Tutorial: JAX 101 from JAX docsfile is a great point to start, though I found a bit challenging to understand some examples as a beginner.

Robert Tjarko Lange has several blog posts on using JAX on deep learning based projects, while Colin Raffel demonstrated key concepts of JAX in You don’t know JAX with code.

How does vmap() function work?

According to JAX docsfile on vmap, jax.vmap(function, in_axes=0, out_axes=0) returns a function which maps the function one specified over using in_axes and stack them together using out_axes . The concept is simple but it took me a while to understand when in_axes or out_axes is not set as default.

To understand what it is really doing when in_axes and out_axes change, I’m creating simple arrays with unique numbers in matrix forms called a and b and passing them into a simple function numpy.sum(axis=None) to do default element-wise addition. 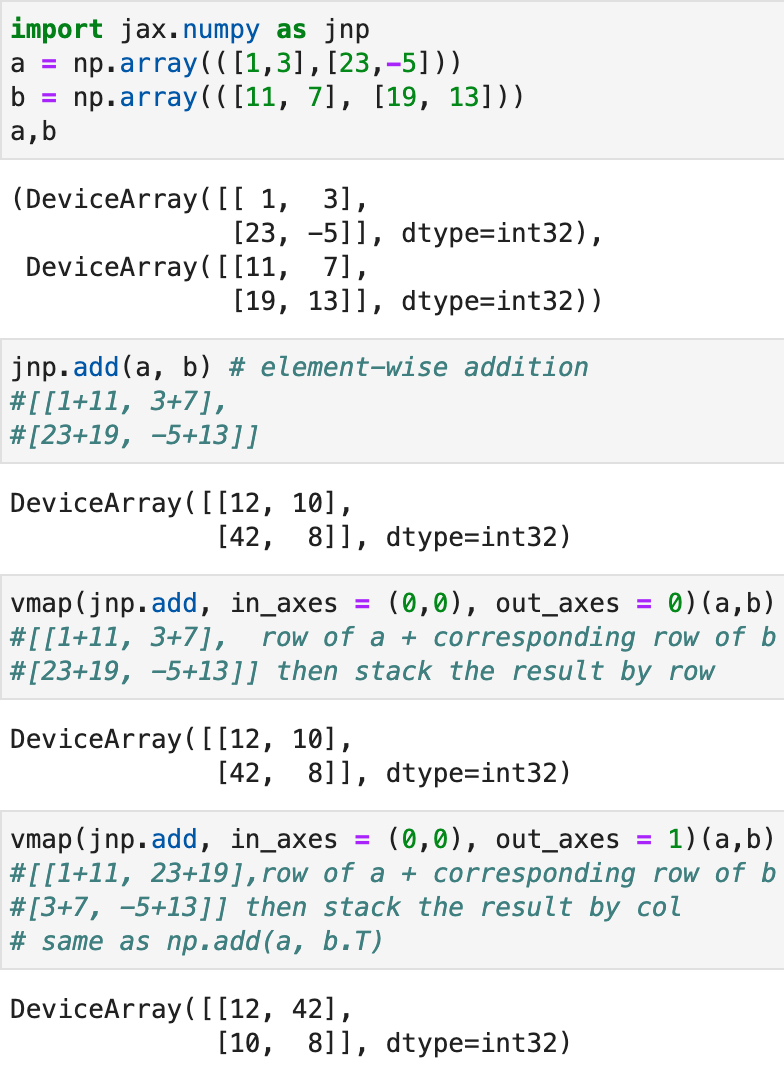 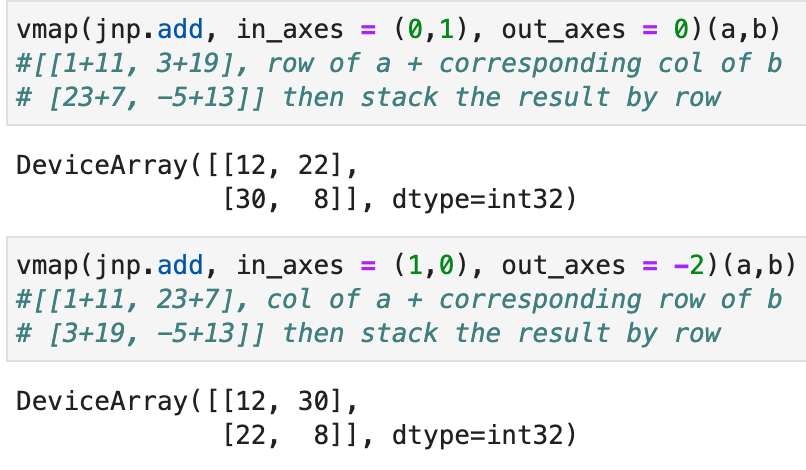 The operation is done on the specified axis. Overall, if in_axes has all integers, the shape of the output remains the same as of (2,2) just like what you would see in regular np.add(a,b). 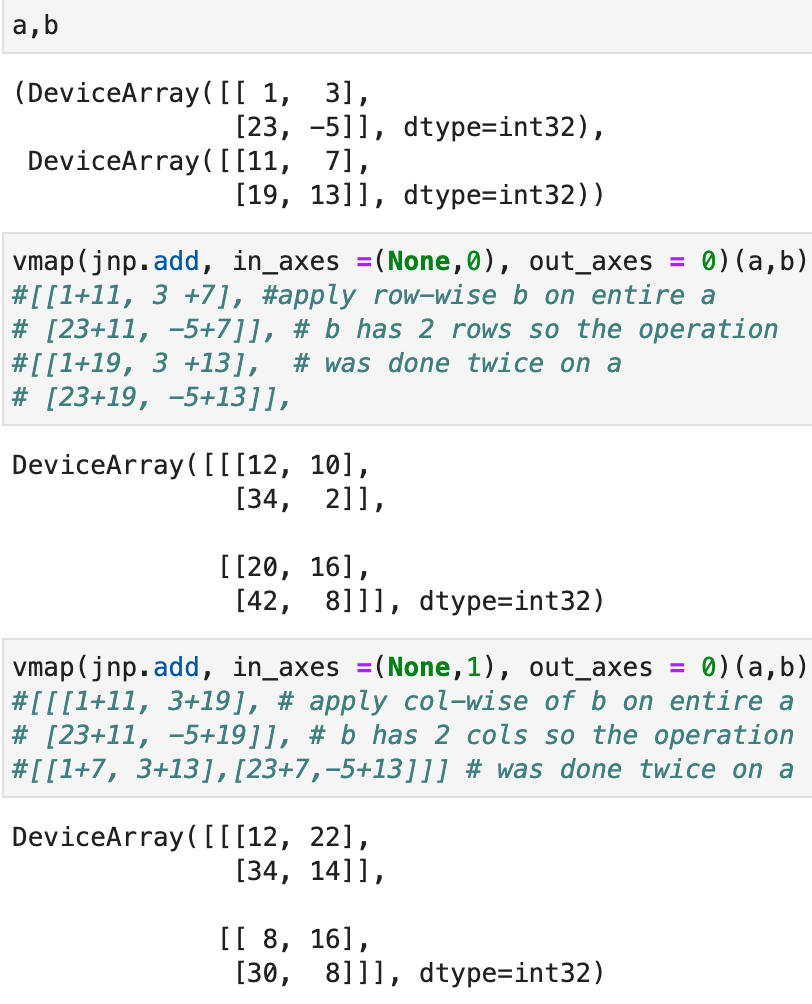 The example outputs are all of shape (2,2,2) instead of the original shape (2,2), why is that? We see the in_axes for a is always None, this indicates the operation is going to pick whatever axis specified in b and apply it on the all rows of a. Given a is of shape (2,2) and b has two rows and two columns, you can think of each operation produced two copies of a, then apply row or col of b on a.

The above example is simple, each input is of the same shape and has two dimensions. What if we have two matrices each of shape (2,3,5,7,9)? What would we expect when changing the in_axes? Note that although a and b matrices are initiated differently, they have the same shape. 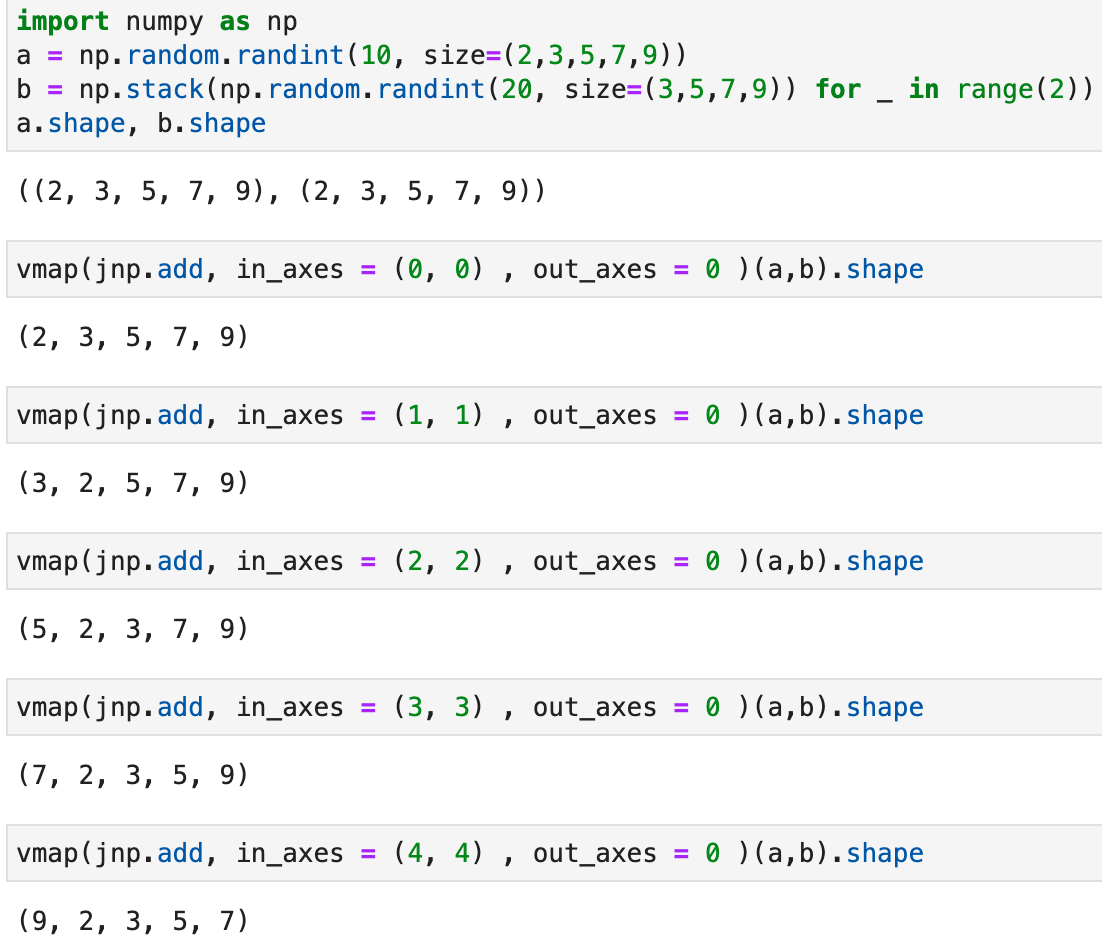 Based on user supplied function, only inputs with matching dimensions will work together. Try vmap(jnp.add, in_axes = (0, 1) , out_axes = 0 )(a,b).shape it would tell you 0-axis of a is of size 2 while 1-axis of b is of size 3, therefore, the computation can’t happen. Then it is obvious that the operation takes out whatever axis specified and stack them as 0-th axis.

Let’s set one of the in_axes as None and change the out_axes. 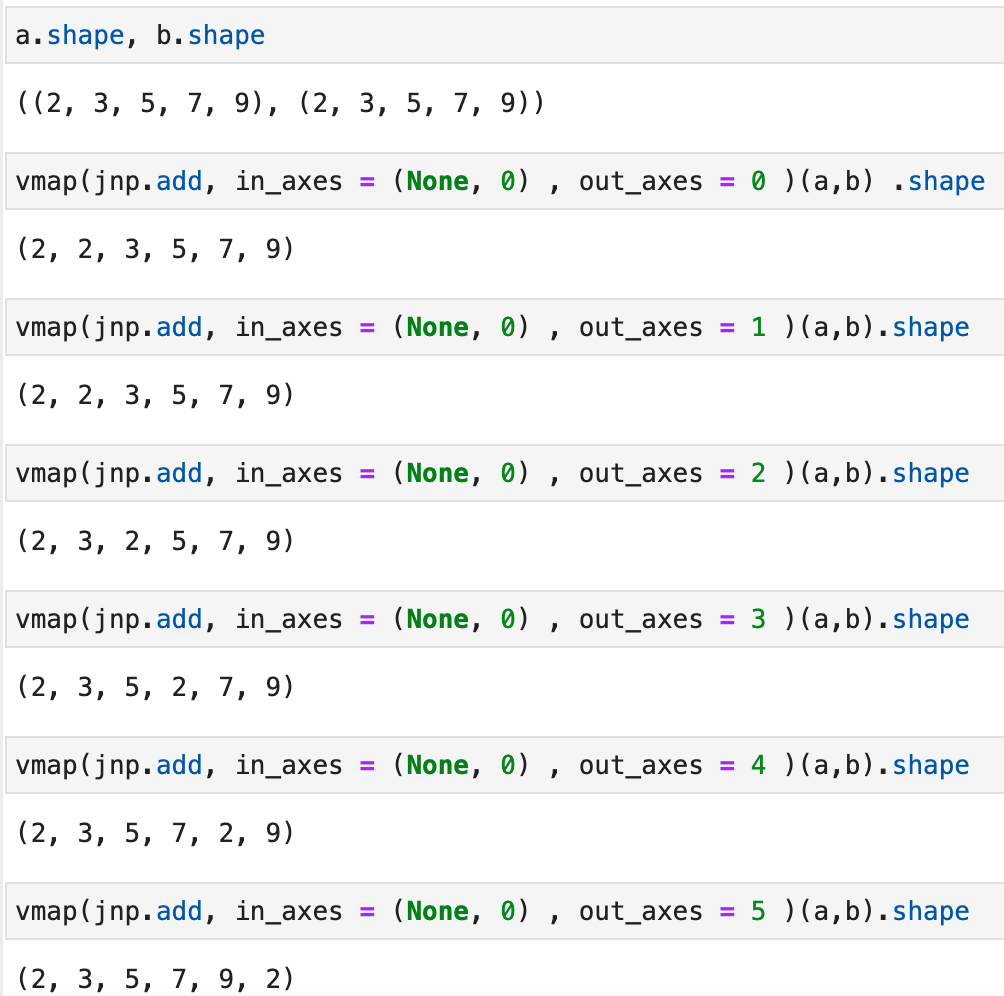 You realized there is an additional axis in the output just like in the simple example. But the returned shape can be a bit confusing. Is there a pattern? I summarized the pattern in an intuitive way in the table below, though it might also be possbile to infer the output shape in a different way. First, write down the output shape when out_axes=0. Then, sequentially swap output axes. The output shape of out_axes ==n equals to swapping the (n-1)th index with nth index in out_axes ==(n-1) shape.

I want to thank Arkadij Kummer for giving valuable advice on making this blog post easier to understand :) .